Your browser is out of date.

You are currently using Internet Explorer 7/8/9, which is not supported by our site. For the best experience, please use one of the latest browsers.

The DEI3283 consists of two analog ARINC 429 Receivers which take differentially encoded ARINC level data and convert it to serial TTL level data. The DEI3283 provides two complete analog ARINC receivers with no external components required. Input level shifting thin film resistors and bipolar technology allow ARINC input voltage transients up to 200 V without damage to the DEI3283. Each channel is identical, featuring symmetrical propagation delays for better high-speed performance. Input common mode rejection is excellent and threshold voltage is stable, independent of supply voltage. Data outputs are TTL and CMOS compatible. Two TTL compatible test inputs used to test the ARINC channels are available. They can be used to override the ARINC input data and set the channel outputs to a known state. The DEI ARINC line driver family ICs are companion chips to the DEI3283 line receiver. Together they provide the analog functions needed for the ARINC 429 interface.

For built-in test capability, the TESTA/B inputs are provided to force the outputs to a predetermined state regardless of the ARINC input state. The test stimulus exercises the window comparators and logic output buffers; the ARINC input signals are not affected.  If the test inputs are not used, they should be grounded. 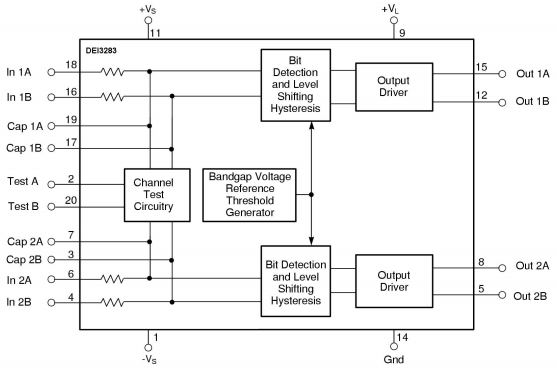